Mass Shootings in The U.S.: Who is to Blame? 8Chan, Social Media, Video Games, or The Communications Decency Act?

On Saturday, August 3rd, 2019, a gunman stormed into an El Paso Walmart, killing 22 people and wounding dozens more, according to the New York Times. Hours later, early Sunday Morning in Dayton, Ohio, a masked gunman opened fire in a popular nightlife district killing 9 people and injuring 27 others, according to CNN. Now, in the wake of these two tragedies, Cloudflare is terminating the website 8chan from its web hosting service because of 8chan’s influence on multiple mass shootings, including the El Paso shooting.

These mass shootings are two of many that have occured with ties to 8Chan.

“Unfortunately, this is not an isolated incident. Nearly the same thing happened on 8chan before the terror attack in Christchurch, New Zealand. The El Paso shooter specifically referenced the Christchurch incident and appears to have been inspired by the largely unmoderated discussions on 8chan which glorified the previous massacre. In a separate tragedy, the suspected killer in the Poway, California synagogue shooting also posted a hate-filled “open letter” on 8chan. 8chan has repeatedly proven itself to be a cesspool of hate,” wrote Matthew Prince, CEO of Cloudflare in A Blog posted to the Cloudflare website.

Comments on the blog and in the media have not necessarily praised Cloudflare for making such a move. In fact, it has thrust the conversation of lawless big tech into public discussion even more so than before, with many blaming social media and violent video games for the rise in mass shootings and many more unconvinced that shutting 8chan down will solve the problem. 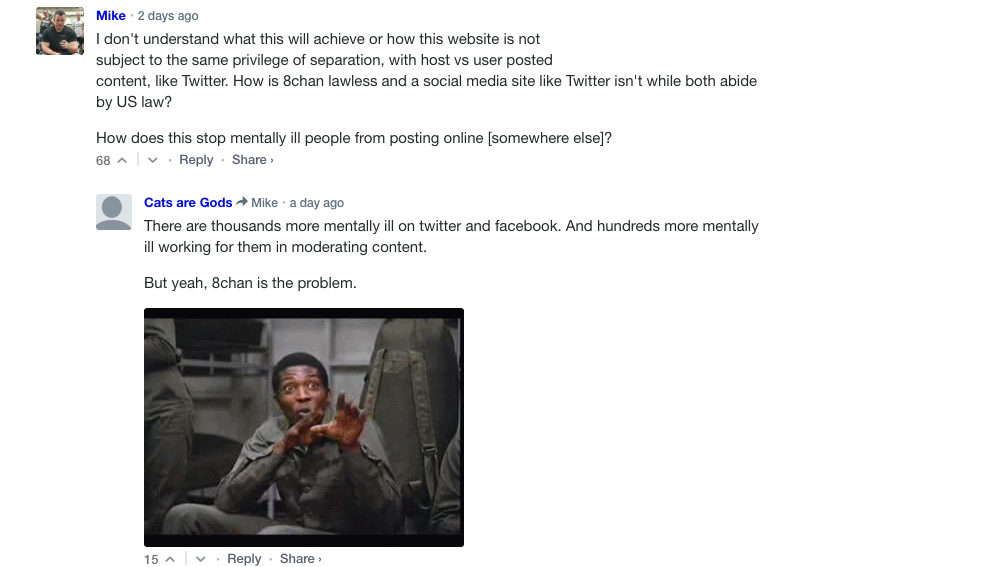 Once news broke that Cloudflare would be terminating service for 8chan, Twitter users began to notice that 8chan’s Twitter account was verified. This put the Twitter world into a frenzy wondering how such a hate speech fueled platform could be given one of the highest-regarded  honors of social media, a blue check mark next to their username. Soon, the hashtag #Untwitter8chan began trending on Twitter. 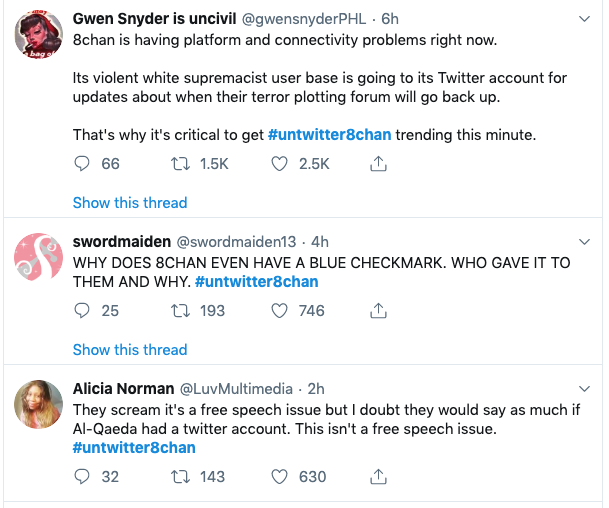 Still, 8chan remains verified on Twitter despite public outcry. However, another topic of conversation made its way to the forefront of social media discussion. Next to blame for the increase in violence in the United States is none other than video games. The hashtag “#VideoGamesAreToBlame” started trending in the USA with more than 14 thousand tweets and counting, initially stemming from A Speech Made By President Trump that blamed video games specifically to be the main cause of mass shootings.

However, many disagree with Trump placing the blame on a popular pastime. 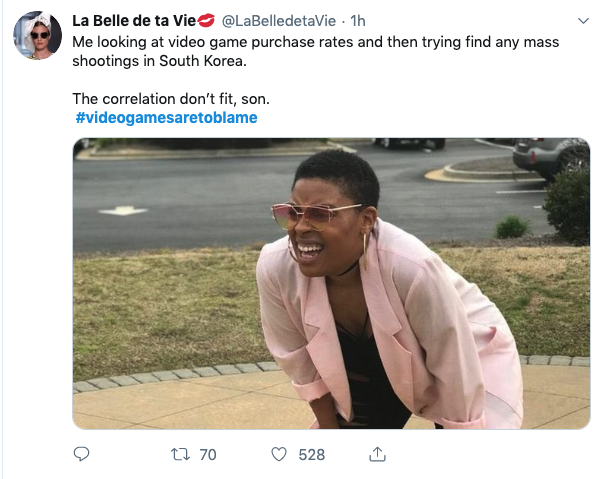 It’s no secret that the U.S. has had an alarming history of mass shootings throughout the years. In fact, compared to other countries, the United States has the 28th-highest rate of deaths from gun violence in the world, according to data published by NPR who claims that the U.S. has far greater deaths than what is seen in other wealthy countries.

Then, when you look at the data for video game revenue globally, you can see that South Korea and China have higher revenue than the USA, while the USA has a far higher rate of violent gun deaths than any other wealthy country, according to data published by Vox. 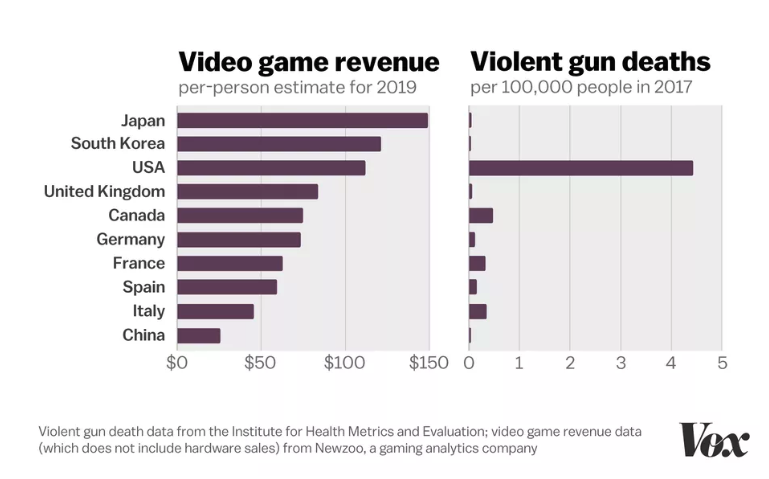 But wait, that’s not all there is to blame. Next up is Section 230 of The Communications Decency Act. In Tuesday’s Edition Of The New York Times, the front page of the business section reads, “Why Hate Speech on the Internet Is a Never-Ending Problem” followed by a clipping from Section 230 reading, “No provider or user of an interactive computer service shall be treated as the publisher or speaker of any information provided by any other information content provider” then the statement, “Because the law shields it.” 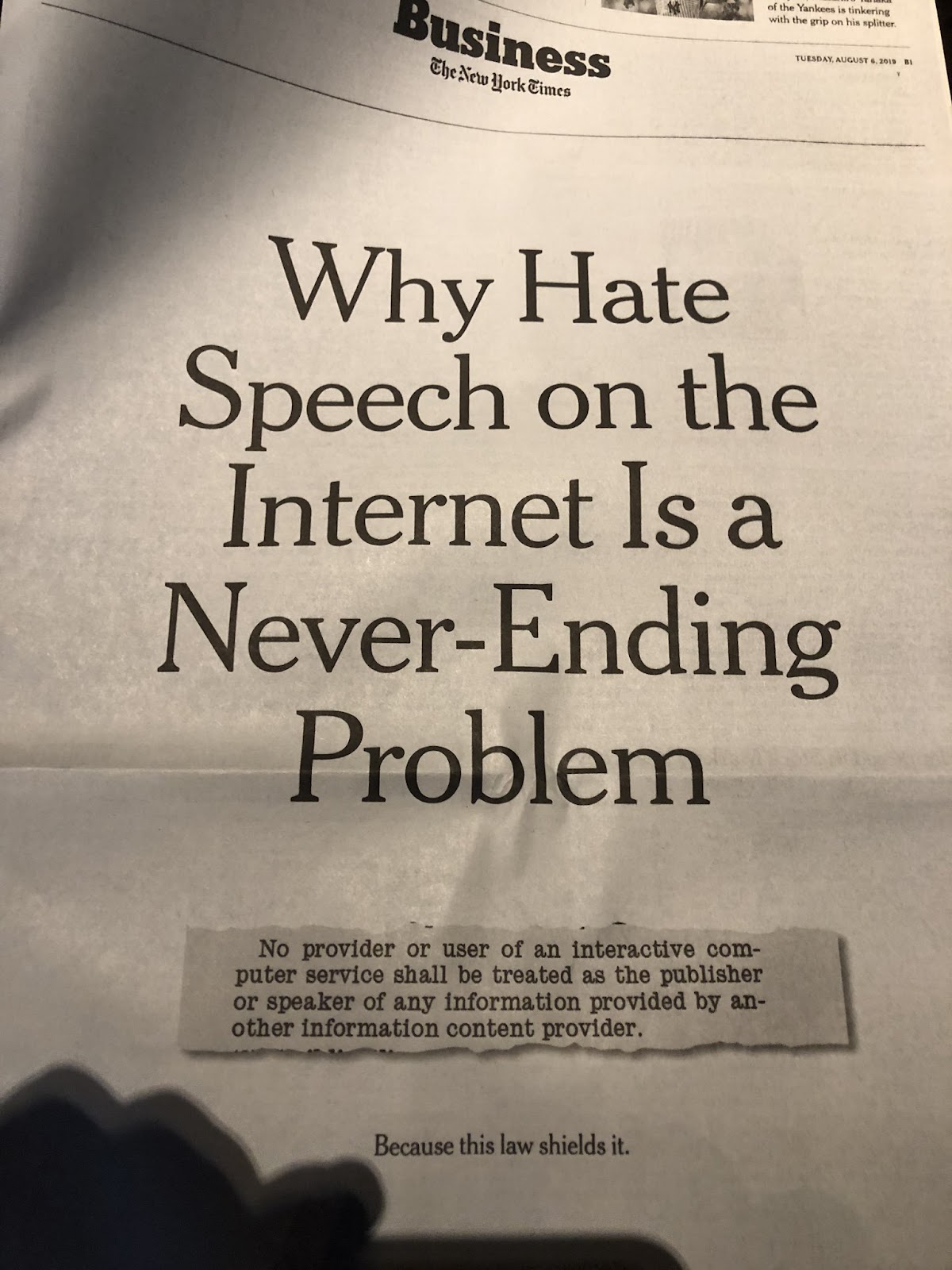 However, blaming or changing the CDA Section 230 may not be the solution. Section 230’s primary purpose is to cultivate and encourage moderation. Eliminating this law would promote more censorship because if tech giants were held responsible for user generated content, it would motivate them to remove problematic content that they do not want to be held liable for, or even worse, internet services will stop moderating all together, leading to even more hate speech and harmful content on news feeds.

In fact, even the New York Times had to issue a Correction on this:

“An article on Tuesday about a 1996 law meant to protect young internet companies from liability misidentified the law that protects hate speech. It is the First Amendment, not Section 230 of the Communications Decency Act. The error was repeated in the headline.”

[SEE: The Controversy Surrounding Section 230 Of The Communications Decency Act]

So, who is to blame? It seems like there is a myriad of causes for mass shootings but the solutions don’t seem to be clear yet.

As America continues to point fingers in almost every direction it seems, be sure to be aware of how you and those around you are using the Internet. If you are being defamed, cyberbullied, or threatened on social media or the Internet in general, contact the Internet attorneys at RM Warner Law. We can guide you through the path to justice. Get In Touch Today.