Given the money that is pouring into the esports industry, it’s no surprise that celebrities are investing in esports teams.  American rapper Kirari Kendrell “Offset” Cephus announced ownership investment in the esports organization, Faze Clan, via Instagram on Thursday, August 15th, 2019.

According to the Esports Observer, Offset said in a release, “I love gaming and esports is the future. These two facts make it only right that I be apart of the biggest esports organization with some of the best players in the world.”

Offset himself is familiar with the power of a talented group, starting his rap career as a part of the American rap trio “Migos” alongside rappers Quavo (born Quavious Keyate Marshall) and Takeoff (born Kirshnik Khari Ball). Offset also made “money moves” by partnering with female rap success Cardi B through the collaboration of hit songs, iconic performances, marriage and most importantly, the birth of their daughter, Kulture.

Offset appears to be venturing out of rap and into the world of video games through his investment in Faze Clan. However, music might not necessarily be off the table with this partnership. In fact, collaborating with the esports organization on music exclusive to Faze Clan may very well be a part of the deal.

“We view Offset as an amazing addition to the FaZe Clan family and look forward to working closely with him to develop co-branded experiences, content, apparel and anything else his incredibly creative mind can conceive of,” said Faze Clan’s President Greg Selkoe in a quote published by Hip Hop Wired, “FaZe is all about pushing the boundaries of what an esports brand can be as we truly believe gaming now sits at the epicenter of almost all current pop-culture trends. Our roots and DNA are gaming, but we have built a lifestyle brand and social movement around this. What is key to our formula is that everyone we bring into the FaZe Clan family has to first have an authentic love for gaming and Offset is both one of the planet’s biggest musicians and a skilled gamer and esports aficionado as well.”

Gaming has become synonymous with streaming music. Pairing esports with hip hop might was well be a match made in heaven. Rap music and artists have been credited for boosting the exposure of games like Fortnite and Grand Theft Auto for years. According to XXL Magazine, hip hop artists Drake and Travis Scott broke the Twitch streaming record for most concurrent viewers on a single stream when the two joined in on a game of Fortnite with esports athlete Tyler “Ninja” Blevins in April of 2018.

Not to mention the multiple rap songs that were inspired by the game Fortnite including the song “Fortnite” by the artist 03 Greedo as well as another song of the same name by Murda Beatz, Ski Mask The Slump God, Lil Yachty and Yung Bans.

However, hip hop’s relationship with Fortnite has not always been positive. In fact, the dance moves incorporated into the game have caused issues within the rap community. XXL Magazine reports that the game allows players to use the BlocBoy JB “Shoot” dance but does not compensate or credit JB. Chance the Rapper took to Twitter to call out the game regarding this issue. 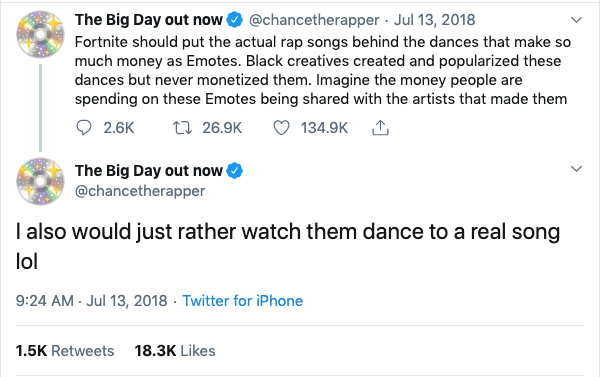 It could be possible that brands like Faze Clan seek to involve rap artists in order include hip hop music and culture into the esports world without fear of running into a lawsuit. It would be ideal for Faze Clan especially to avoid any more legal issues as they are currently being sued by their former member and Fortnite star, Tfue, over contract disputes.

Offset is not the only rapper investing in esports either. The Esports Observer Reports that Drake (born Aubrey Graham) invested in the esports organization 100 Thieves in October 2018 and Tory Lanez (born Daystar Peterson) invested in Luminosity Gaming.

According to attorney Raees Mohamed, partner of RM Warner: “We will continue to see a rise in investment and partnerships in esports, particularly from the music industry. Streaming content to millions of viewers is a significant value proposition, especially when you consider the esports demographic being targeted. The two demographics overlap perfectly. The marketplace is still in nascent stages, so it will be interesting to see what happens over the next year.”

Like Offset said previously, the esports industry is the future so it doesn’t come as a shock to see rappers and hip-hop artists becoming more and more involved. Hip-hop too has seen a major increase in popularity within the last decade and it is unlikely that this will decrease any time soon. It will be interesting to see how these two industries will grow and evolve together.

If you seek legal assistance for issues or business deals within the esports industry, contact the experienced esports attorneys at RM Warner Law. We know how to help.

A 12-Year Old eSports Pro Fortnite Streamer is Now Required to Stream with His Mother Present!

H1ghSky1 is a professional Fortnite streamer. He has almost a[...]